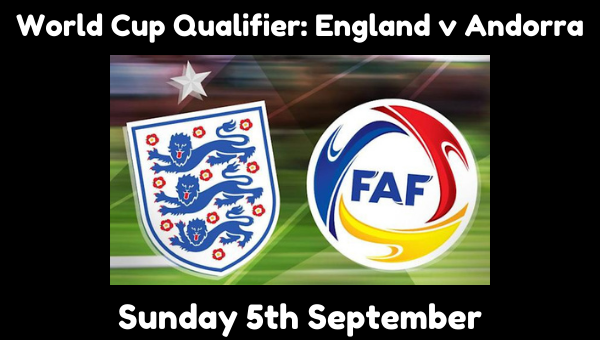 Join us in the Members Bar to watch the World Cup Qualifier – England v Andorra on our large screen TV! The Three Lions were blasted by the Hungarian crowd in Budapest, with Raheem Sterling pelted by plastic cups after his opening goal, but came through with a 4-0 conquest to silence the Puskas Arena. Boss Gareth Southgate will be pleased with how his relatively young squad coped under testing circumstances, particularly against a team that caused some elite nations plenty of problems at Euro 2020.Harry Kane will hope to sharpen up after spurning several strong chances to extend the lead, but he will be pleased to be back in the thick of the action. England sit top of Group I with four wins out of four, 13 goals to his name and just one goal conceded so far. Near-inevitable victory here could potentially open up and eight-point gap between themselves and second-placed Poland.

Kick-off is at 5 pm so feel free to join us in good time so you can settle down in comfort with your friends and other members, with the well-stocked bar to hand!